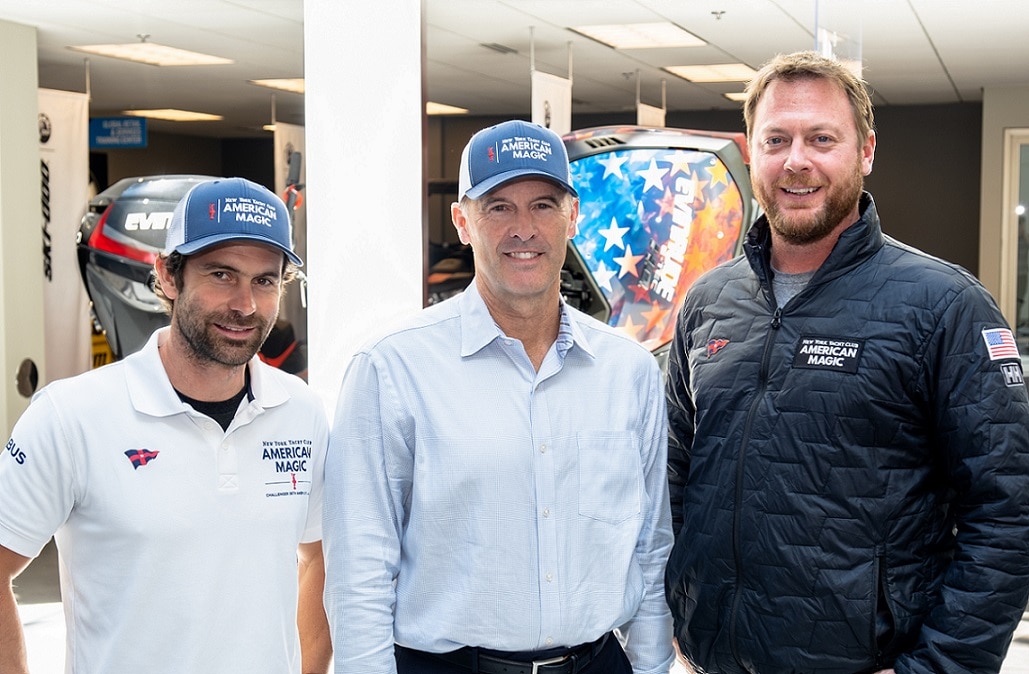 STURTEVANT, Wis., April 29, 2019 – Evinrude announced today that it has been named Official Engine Supplier of New York Yacht Club American Magic, a professional sailing team and Challenger for the 36th America’s Cup. Evinrude will outfit American Magic’s fleet of chase boats with 300 HP E-TEC G2 engines. In addition, Evinrude will provide the organization’s technical crew with a  500-hour training course at its Sturtevant facility. Each engine will also be custom wrapped with an American flag-based design.

“We are proud to sponsor New York Yacht Club American Magic in its challenge for the America’s Cup,” said Tracy Crocker, president of BRP Marine Group. “Competition is in our DNA and Evinrude engines have been on the transoms of countless boats that have set records and won tournaments throughout our brand’s more than 100-year history. It is an honor to power American Magic’s chase boats with E-TEC G2 engines and be a part of the team’s efforts to bring the Cup back to the States.”

“Our fleet of chase boats is vital to American Magic’s on-the-water racing, training and safety,” said Terry Hutchinson, Skipper and Executive Director of American Magic. “We are thrilled with the reliability and power of our E-TEC G2 engines, and are grateful to have Evinrude onboard with our team.”

The America’s Cup is the highest prize in sailing, and the oldest event in international sports. The Cup was first contested in 1851, predating the modern Olympic Games by 45 years. A 132-year stretch from 1851 to 1983 saw boats representing New York Yacht Club and the United States successfully defend the trophy 24 times. In 1983, Australia II became the first Challenger to successfully lift the trophy from the Americans. The Cup is currently held by the Royal New Zealand Yacht Squadron’s Emirates Team New Zealand, who will be the defending team in 2021.

Evinrude’s engine line up, from 3.5 to 300 HP, offers customers superior value across a full range of applications, and are available at authorized Evinrude dealerships worldwide. Follow Evinrude on Facebook at www.facebook.com/brpevinrude.

About Evinrude:
Evinrude, part of the BRP Marine Group, is a global manufacturer of outboard marine engines. A model of innovation, Evinrude developed the first commercially viable outboard engine in 1909. Celebrating 110 years of innovation in 2019, Evinrude’s engine line up, from 3.5 to 300 HP, offers customers superior value across a full range of applications while meeting all global emissions standards. Engines are available at authorized Evinrude dealerships worldwide. For more information visit http://www.evinrude.com.

MIAMI, February 14, 2019 - Evinrude, the American Boat and Yacht Council (ABYC) and the National Marine Distributors Association (NMDA) announced today that Evinrude will donate two million dollars’ worth of Evinrude ETEC G2 3.4L V6 outboard engines to the ABYC Foundation supporting next generation marine technician training. The donation, which is the largest of its kind in history, will support students in high schools and colleges across the U.S. and Canada. NMDA will provide funds for schools to purchase related materials and to transport the engines.

STURTEVANT, Wis., January 17, 2019 – Evinrude announced today that it has signed on as a sponsor of the new Major League Fishing (MLF) Bass Pro Tour and will be the title sponsor of the series’ Stages in 2019.

STURTEVANT, Wis., October 15, 2018 – Gateway Technical College and Evinrude on Monday, October 15, will hold an official opening of the BRP Evinrude Technology Institute at the college’s Technical Building on its Racine Campus.

There’s a need for qualified technicians in the motorcycle, marine and outdoor power products industry, and the lab features the many modern engines, outboard motors, motorcycles, personal watercraft and other pieces students can train on to become proficient in the skills needed for them to succeed in their career.

Evinrude and BRP contributed the many different pieces as well as brought industry knowledge to ensure the lab provided cutting-edge equipment and curriculum for this in-demand career field.

STURTEVANT, WI – Evinrude today announced that it is now a part of the newly established BRP Marine Group. Evinrude, an outboard engine manufacturer that developed the first commercially viable outboard engine in 1909, will join Alumacraft, a 70-plus year-old manufacturer of aluminum fishing boats which was acquired today, as the first players in the new Group.

« Previous
Next »
Your browser ([browserInfos]) is out of date. It has known security flaws and may not display all features of this and other websites. Learn how to update your browser